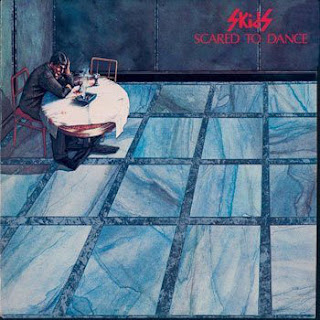 Back to the late 70s and the music that looms large in my early years. If there is one band that for me is synonymous with the Wilson household for me it is the Skids. Whenever I hear the best band from Dunfermline, I am transported up the extremely pot-holed Whitehill Terrace past Donald the pyscho Alsatian, Kyle's dog to 'Johnshaven' and the room that Stiff and Bat shared.

Into The Valley, side 1, track 1, on Scared to Dance was released as a single a week before the album on 16th February 1979 and included all of the elements that would make the Skids brilliant, incomprehensible lyrics that you knew were bound to be slightly pompous, a chorus that you could sing along to with Jobbers and above all that unmistakable guitar sound that will always be associated with the brilliance that was Stuart Adamson. It wasn't the Skids first single, there had been three the previous year but this was the one where people started to take notice of the band and as an opening track on a debut album it certainly grabbed  you by the collar and gave you a shake.

I still have no idea what the full lyrics actually are and after forty two years I have no notion to find out. I did read once in an interview with Jobson somewhere that the subject matter was the recruitment of young, naive Scottish youths into the ranks of the British Army and sending them off to the north of Ireland to police the streets there including a friend of the singer's who sadly didn't return from his tour there.

The Skids - Into The Valley

I'm with you on that Drew
Bloody great tune

"AHOY! AHOY! BARMAN AND SODA..." That bloody advert. Still the best song even now, one that makes you immediately get up and dance like Richard Jobson.

One of their best. I regret we didn't have an outing to see them during the blogging summit.