Silence of the Morning 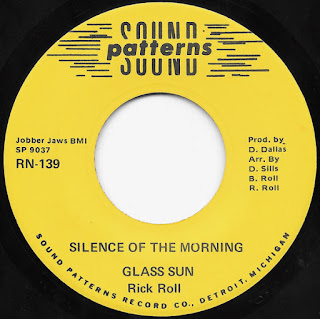 How about a huge slab of fuzzed up heavy psych to brighten up your Thursday in self-isolation?

The Glass Sun were a trio formed in Westland Michigan, originally named the Cyclones but changed their name when the brothers, Bruce and Rick Roll, the guitarist and bassist returned from being drafted to Vietnam in the late 60s but it wasn't until 1971 that they entered the studio to record the first of two singles they released on local Detroit label Sound Patterns. 300 copies of Silence of The Morning/Oh Sandy, both written by Rick while stationed in Vietnam in 1968,  were pressed up and like so many other records of the time failed to make an impression on the record buying public until the internet age when Silence of The Morning was unearthed and shared all over the world by psych and garage heads. The single is now rightly considered a classic of the garage -fuzz genre and would set you back north of £400 if you were lucky enough to source a copy of the 7".

The Glass Sun - Silence of The Morning
Posted by drew at 11:02

The Vietnam- psyche rock crossover needs investigating. I'm sure it's already been done by somebody