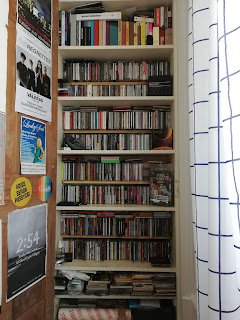 Today's track turned up a couple of times over the past week. Firstly, on the UNKLE mix, Edit Music For A Film and also when sorting out the cupboard pictured above yesterday I found a CTI Records sampler cd which had been previously presumed lost quite a while ago which has the track on it.

As an officially very old man, I can confirm that this was indeed a hit back in 1973 and was absolutely hammered on Radio 1 at the time. Great to hear it again after all these years.

What The Swede said. And i'm sure I have a copy of the single in one of my boxes. I liked it a lot , but it did get overplayed.

I included this in my Top 20 seven+ minute tracks that Johnnie Johnstone's currently compiling over on Twitter. Nailed on, as they say.