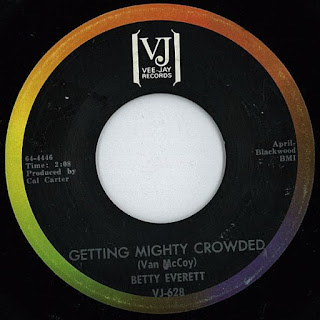 Sometimes you forget just how good some songs are.  Either through being too familiar or just in the context that you tend to hear them, you don't really listen and appreciate them, then you hear them unexpectedly and you see the song in a whole different light.

This happened to me the other week, I had the iTunes on the computer while completing the excruciatingly tedious job of uploading and classifying site documents to our eTMF. I was just about to lose the will to live when the horns and the clip clop intro to Getting Mighty Crowded come out of the desk top speakers that I have in my home office.  Then the gorgeous tones of Betty Everett's lush velvety voice started to give me goosepimples the faintly echoey production just perfect. I am not sure that I have ever just sat and listened to this song before, I associate it with dancing (badly in my case). I played it three times on the bounce.

Getting Mighty Crowded was first released in 1964 on Vee Jay Records, the first American label that the Beatles signed for. It was picked up by the Twisted Wheel crowd and has been a staple on the northern scene ever since.  Elvis Costello recorded and released a particularly pish cover on the b-side of High Fidelity.

I suppose a track that is 55 years old and can still stop you in  your tracks can be considered a classic. Well it is to me anyway.

Betty Everett - Getting Mighty Crowded.
Posted by drew at 08:00

You're absolutely right Drew, what's that phrase about familiarity breeding contempt? There are songs that I know so intimately that I somehow get out of the habit of actually properly listening to them, whistling or singing all over them instead. I remember when the Sound System Clash box came out a few years ago, I sat down and gave my total, undivided attention to London Calling from start to finish for the first time in a long time - it was an utter revelation! And this is what I would consider to be my favourite and most played album of all time!
Sorry, I went off at a tangent there! Betty sounding terrific on this damp, drizzly morning.

Such a great song, Drew. I'm not about to proclaim the Costello cover to be better, but I do think it's quite good. I think the 'Get Happy!!' era is Costello at his best, and he is the one nudged me to acts like Betty Everett and Sam & Dave at a time when I would have had little chance to discover them. Perhaps hearing Costello's take first may have something to do with my affinity for the cover. That happens often with me.