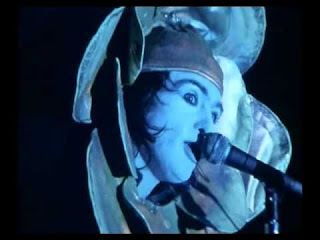 As I warned months ago Genesis would appear in this slot at some point and today is the day.  I have mentioned on quite a few occasions the older hippy types that I kicked about with when I was an early teen, one of them Lex was a big Genesis and Kate Bush fan and most of the time when you visited him it would be one of those two that would be playing although he had a pretty large record collection for an 18 yr old, Inevitably I succumbed to some of the music I heard when up at his bit, I never really got into Kate Bush but some of the early Genesis stuff I really liked, The Lamb Lies Down On Broadway and Selling England By The Pound are two albums that have remained in my head ever since, well bits of them anyway.

But it was Supper's Ready that made the biggest impression on me not least due to it's length, taking up the whole side of Foxtrot and clocking in at just short of 23 minutes. It was also bonkers, back then I had no idea what it was about but now there is a Wiki page dedicated to it and according to Peter Gabriel "is a personal journey which ends up walking through scenes from Revolution in the Bible"

The version posted is a live version from the Archive compilation 1967 - 75, recorded live at the Rainbow Theatre on 20th October 1973 and is slightly extended as the running time is 26:34.

You'll hear no complaints from me - this is marvellous stuff! I've been thinking about putting up a Genesis track one of these Mondays myself. Vive la Prog!

I was never a Genesis fan, but ack in the 1970's, I worked as a daily newspaper reporter in Aberdeen and one of the deputy news editors was called Ethel. Reporters (the hip ones) regularly sang "There's always been Ethel" the first line of the first verse of "I Know What I Like (In Your Wardrobe)" when she was around. Poor woman didn't have a clue what we were singing about until the night of her farewell do when we explained it in a long rambling poem about her. It was a simpler time.