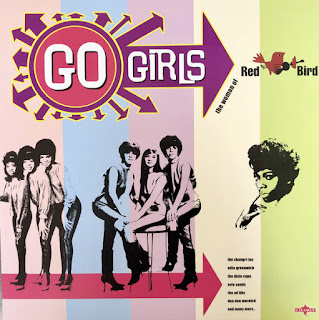 A few Sundays ago while doing the shopping in Sainsbury's Lynn was looking at the home ware and I stumbled across a rack of vinyl which was all very much mainstream fodder, Kate Bush, Pink Floyd, ELO, you get the idea. One thing did catch my eye as it had the Red Bird logo, the red bird playing a guitar. It was called "Go Girls: The Women of Red Bird. I was pretty sure that I would have all the tracks on the excellent comprehensive double cd The Red Bird Story and a few things on 7" but thought I would have a look anyway. As I suspected I did have all the tracks but was beginning to justify the purchase in my head. AS Go Now was on this, I wouldn't have to play my previous Bessie Banks 7" and the version of Baby would undoubtedly be better than the boot single I had and after all it was only 14 quid. But then I noticed that Don't Think My Baby's Coming Back by Dee Dee Warwick was also included, a song that has been on my vinyl wants list for quite some time, and that was it. It could have been double the price and I would still have bought it as a vg+ copy of the single Standing By released on the Tiger subsidiary label in 1964 that had Don't Think on the flip would set me back over £50.

I don't actually mind food shopping, okay truthfully I really enjoy it (well until we are fighting in the isles over the last tin of Spam in a couple of weeks) but stumbling on this album made a pleasurable experience just that little bit better. Just one gripe, why did it have to be on fucking pink vinyl.

Dee Dee Warwick - Don't Think My Baby's Coming Back
Posted by drew at 08:00

What a great and unexpected find.

I have quite a few of these bizarre finds too. One of my favorites is the Modern Lovers' Live from the Longbranch Saloon found next to washing machines at a home store while living in rural Japan 25 years ago. I like this Go Girls comp so much I just bought it!

It was that Swede.