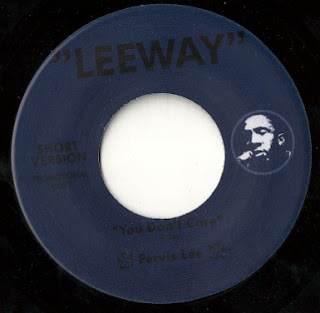 I'm a sucker from a brass section that verges on playing slightly flat. There's probably a technical term for the sound that I'm unaware of. I've got several examples in my own collection, a great Howlin' Wolf track, a few reggae tunes. 'You Don't Care' fits right into that bracket. Just delicious.
It was a nice surprise to see you pop up on my sidebar this morning Drew. I hope this is more than a flying visit.

Very good. That raw, flat feel, it reminds of tracks onthe Boddie Recordings set I have.

This goes to show how often I look at my own blog, including the blogroll. I just noticed you have made a couple of appearances this week. Good to have you around, my good man, and this song is so very you. Nobody else in our little sphere plays stuff like Pervis Lee. Damn, this gets the whole body moving. More!

What Brian said. Literally everything.
Swc.