What Does That Remind Me Of? 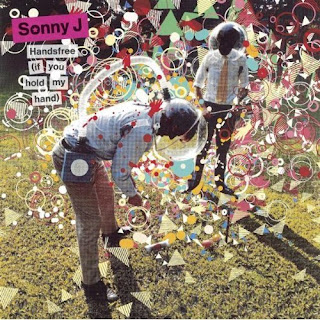 This was first posted back in 2009 and the record has been played many times and has indeed taken it's place in the singles box that would be grabbed in an emergency. A few months ago I heard the new single by Mattiel , Count Your Blessings which reminded me of the Sonny J single from 2009.  I couldn't get the tune out of my head, eventually biting the bullet, ordering from Burger Records and paying the extortionate postage rates from the USA. Over the last few weeks I have heard the song quite a few times on 6Music which suggests that the track will be getting a UK release.

Sonny J, real name Sonnington James III (aye right!) is an English musician/producer from Liverpool. The music on his debut album is a real mish mash of styles and samples, think the Go Team and The Avalanches and you are in the right ball park. I absolutely love it.

If you're not familiar with him and you live in the UK, you probably have heard his first single, Can't Stop Moving, as it was used in a TV ad for Fabulous Radio 1 but don't let that put you off as it is a rather fine single also, really uplifting with more than a hit of northern soul and Jackson 5 in the mix. I'm sure that I read somewhere that when this single, which was originally self released came to the attention of a few industry types it led to a small bidding war between the labels with EMI winning out as they agreed to put the single out on the long mothballed $tateside label, but don't quote me on that I may just have made it up.

Hands Free was the third single from the album and was released in June last year and although very reminiscent of the mid sixties, sounds really fresh to these ears, although I'm a sucker from that kind of stuff. I think that this may be right up Mondo's street.

Sonny J - Hands Free (If You Hold My Hand)

and the promo for Count Your Blessings