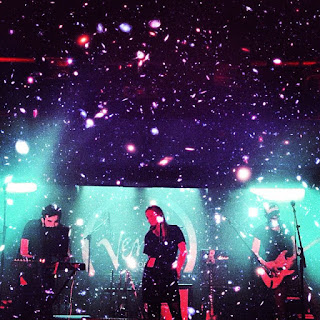 I have to admit that I don't have much enthusiasm for blogging, can't seem to get my arse in gear.

Last week over at The Sound Of Being OK, Tim was musing if in the future there would be people who would lust over rare mp3s the way some of us sad sacks salivate over obscure pieces of vinyl and cds. I opined that I for one would not and that mp3s would never be that rare for me as I always make back ups of back ups and burn cdr versions of tracks that I don't have on either cd or vinyl. That's just the way I roll.

Today's track is a prime example of this. Ever since I first heard Swam from a Song By Toad session by Le Thug I have been wishing for,  pleading with the band via Twitter and Matthew at any opportunity to release the track on vinyl and at one point pitching the idea of an Optimo remix which could do for Swam what Weatherall's mix did for My Bloody Valentine's Soon.  However,  now five years later I don't think my wishes will be granted and I will have to make do with the inferior digital  version, the download code I received along with another seven tracks that were included with a four pack of Barney's Beer released for RSD 2013 from Song By Toad Records, when Matthew decided to put to the test his hypothosis regarding what was more important to people who bought records from his label , beer or records. Along with the 4 pack of excellent beer which contained a download link for 2 tunes from Le Thug, Zed Penguin, Plastic Animals and Magic Eye, SbT released a 12" ep containing a further two tracks from sessions recorded for the label from each of the 4 artists. The lovely red vinyl 12" did include two great tracks from Le Thug including the epic Sense In Scotland but not Swam, I had to buy the beer to get that track, which wasn't that much of an ordeal, although being alcohol it wasn't available in Monorail and I had to trapse up to Bath Street to the location that used to house 23rd Precinct Records but at that time had been turned into a rather upmarket offie.

Anyway, the point of the piost is that this track is probably the rarest and most precious MP3 I own which Has been backed up in several places and has been burned to at least 3 cdrs.

Now that's a tale I can appreciate. Although you didn't get your wish for a physical copy, I'm sure Matthew could empathize with the passion you've displayed. Let's get the ball rolling again. Matthew, if you're seeing this, I'll take one as well. That's two copies! How can you resist?

Me too, so thats Three.
I've just downloaded it again so I've got a new mp3 copy.

That's not my kind of thing at all and I really liked it. Thanks

We only need to convince another 400 odd folk guys and we could be onto something.

Tom W, glad you enjoyed it.