He's All I Got 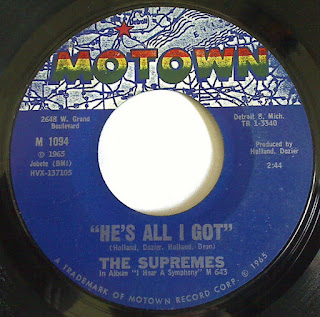 Not really much I can say about the Supremes that hasn't been said before so I'm not going to bother. Today's track, He's All I Got was the b-side to Love Is Like An Itching In My Heart released on the Motown label in 1966 and one of the few Supremes from this period not to reach number 1 in the Billboard Charts, it did make the top ten though, it peaked at number 9 for one week. I'm fucked if I will ever understand the record buying public of the 60s where soul was concerned as both of these tracks are as good as You Can't Hurry Love, You Keep Me Hanging On or the other ten singles that topped the charts in the US.

Agreed Drew, this is excellent. I can only imagine that the record buying public of the 1960s must have suffered from quality fatigue!