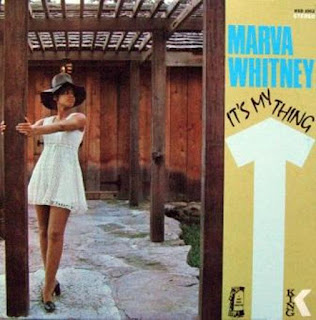 Anyway, over the festering season I was thinking about what I could do to freshen up the blog, maybe kill of the dead horse that is "It's Friday. . . Let's Dance and think of something different to kick off the week. But try as I might, I'm buggered if I can think of a better way to enter the working week than with a bit of soul so there won't be many changes here and as for Fridays well last week may have given you a clue.

Marva Whitney, or Soul Sister #1 she was often referred to had released three pretty unsuccessful singles before she came to the attention of James Brown with whom she toured Europe, Africa and Asia in 1967/68, She also had a relationship with the band leader who would produce her fourth single, "Unwind Yourself", one of those records that from the mid 80s onwards was sampled to death. The follow-up single is the one that we concern ourselves with today or more specifically the flip side of  "What Do I Have To Do To Prove My Love To You",  "What Kind of Man". The single was released on the King label in 1968, however this single also for some unfathomable reason failed to chart. She would not bother the Billboard Chart until her 11th single "It's My Thing" which proves that the USA was not ready for the possibly the "rawest, brassiest" soul voice ever in 1968.

If you like this then you could do worse than purchase "Its My Thing" the album that collects together most of the King singles from 1968/69 which was re-released on Soul Brother Records on CD back in 2000 with extra tracks and double vinyl in 2015. It's well worth the money.

Marva Whitney - What Kind Of Man

I was lucky enough to see her live on her last visit to the UK before her untimely death. Funky and some.

Hadn't heard this before....it's rather wonderful.