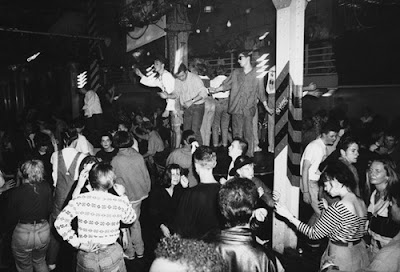 I wasn't really that fussed by the original version of Devotion by Nomad that was released back in 1990, I couldn't really be doing with the Welsh rapper on the track, the instrumental version was ok but was not the one that got the airplay. The fact that the man responsible, Damon (Nomad backwards, get it?) Rochefort wrote for the Bizarre column in The Sun made me more than a little skeptical about the record. Also the use of popular samples from Lyn Collins "Think" and Ten City "Devotion" gave the impression of House by numbers. Last year however Pangaea released a remix which is right up my street. Making it fresh for 2017, speeding it up, giving the track a new bass line and most importantly ditching the rap. When on the subject of the rap, on the original, MC Mikee Freedom mentions Hawk The Slayer and earlier this week on Twitter, Simon, of the much missed The Songs That People Sing and Jake Sniper were discussing that very sword and sorcery film and spookily this tune had already been picked for today's post.

Airdrie are not in action tomorrow, as it is the 4th round of the Scottish Cup and you may recall that the Diamonds were ignominiously kicked out of the cup by Highland league team Cove Rangers in the last round. Last week's 3 -2 defeat away to Stranraer saw the team slip down a league position to 7th. This week it was also revealed that next season Airdrie will be back to part time football, a sensible move I think. Also this week the promising youngster Willis Furtado decided to move on and is now signed for JC's team Raith Rovers.

That is really quite nice!

Good pic of the Hacienda too.

Looking forward to seeing how our new signing gets on with us in the second half of the season.

Don't know about you Drew, but I feel i'm missing out on something when my team aren't involved at this stage of the cup when the big boys join in. I know Raith have a league game tomorrow in lieu, but it's not the same.

Couldn't place the original till I heard this and didn't know about the connection with The Snu urgh! As Sunday night is movie night in our house I might see if I can get Hawk The Slayer on, doubtful.