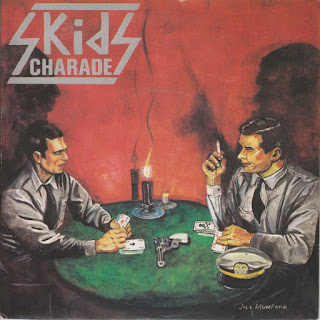 I'm of to see the Skids tonight at the Wah Wah hut with the Wilson brothers and will most likely bump into JC as he is attending tonight also. Still in two minds about this one to be honest, everybody who caught them live last year has raved about them but I just don't know. I will let you know how it turns out. If it's anything like TRB last year then I have nothing to worry about.

Here is the first Skids single I ever bought from Trax in Airdrie as much for the cover as I hadn't heard the track up until that time.

Ah, memories. This was my first foray into the Skids too. I bought the 7" in a ballroom of a Holiday Inn at a record convention in 1983. I didn't really know who the Skids were, but I was attracted to the back cover that showed a photo of a old Scottish piper blowing into a bugle. My love affair with music from your area of the world had already begun, and I noticed one of the names on the songwriting credits was Adamson. I remember thinking maybe it could be the brother of Stuart Adamson from Big Country... my latest obsession. Can you imagine? I wish I could remember how I sorted it out in a pre-Internet world, but we somehow figured these things out, didn't we? The Skids played their first shows in years the weekend of our blogging summit, and I was very tempted to go to the Dunfermline show on that Thursday night... the day before our festivities were kicking off. After reading about those performances, I regretted not making the effort. You're going to have a blast, Drew.

It was a most excellent night lads, even though Jobbers voice kinda lost it during my favourite Skids song Woman In Winter.

I am always amazed with your obsession with Scottish Indie Brian. Fourteen and already at record fairs Brian, I think I was 16 at least before I went to my first! It was sometimes difficult joining the dots back then but I had Stiff's older brothers for that for which I am eternally grateful.

Drew, where I grew up a record fair like that was about all we had.