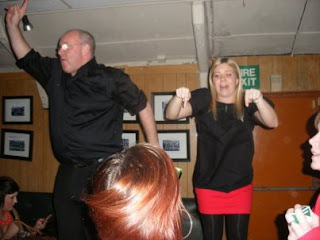 And just when Ctel thought it would be safe to come back out from his hermetically sealed Fall free room. Unfortunately, I'm not finished yet.

Touch Sensitive along with Theme From Sparta FC is probably the track that non indie music lovers will recognise as it was used to sell whose small card beloved by young boys who love to waste petrol by accelerating too quickly and having ridiculous exhausts fitted. The less said about their choice of bass heavy tunes that they like to inflict on passers by the better, suffice to say it's not the Fall. But I digress, Touch Sensitive was released in 1999 and horror of horrors it contained a dance mix.

"Shut the fuck up, bandwagon jumping, not us, The Fall invented dance music back in the early 80s" was not something MES ever said but it could have been.

Have a good weekend people. I will mostly be listening to the Fall.

I love Touch Sensitive. Played it out when DJing from time to time.

A great track with one of my favourite lines 'They say what about the meek?
I say they've got a bloody cheek' I don't mind the remix, but i'd rather dance to the original.

Brilliant minds Drew. I have one more post planned and thank you for leaving me one of the two to feature so we don't overlap too much for the viewing public.