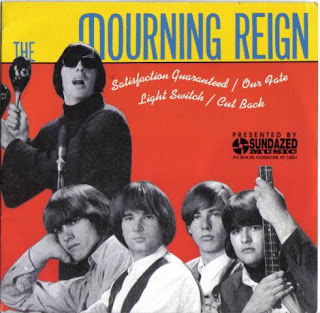 Satisfaction Guaranteed is a fuzz drenched lost classic, ( I know what your thinking "that's what you always say") and you would be correct as most of the songs featured in this spot were more or less ignored at the time but thankfully some people kept digging in crates in the 80s and 90s and brought these tunes to the attention of more garage fans.

Today's featured track was the flip side of the Morning Reign's first single Our Fate and was released in, yip, you've guessed it that golden year of Garage, 1966. The band hailed from San Jose, California and being from there found it very hard to step out of the shadow of the Count Five and The Chocolate Watch Band, I think that this track is as good as anything by either, well possible not as good as Psychotic Reaction but pretty close.

The Mourning Reign - Satisfaction Guaranteed
Posted by drew at 08:00

It's getting tough to find new superlatives - fantastic stuff.

Ah Drew, we're on the same page this week - I've been revisiting Pebbles etc recently and all this great US garage from the '60s which I was oblivious to until the mid '80s. I couldn't believe it sounded so fresh (and so hard!)
Love this track - great stuff.

It is rather splendid guys.

C - I was given a couple of compilation C90s by a mate's brother around 85/86 and loved what I heard but the northern soul took over and then the acid house and it wasn't until the late 90s that I explored this stuff much deeper and have been hooked ever since.