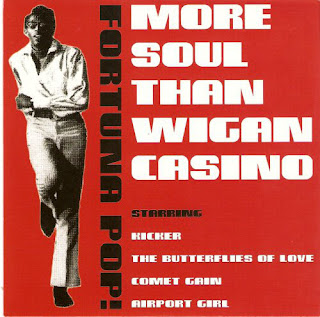 No, not really, well maybe from all accounts in the dark days near the end from what I've read but not the glory years.

What do you get when you get four indie bands in the mid noughties to cover a soul song each of their choice? Apart from a record that if any purists were to stumble across it, would probably induce apoplexy, a mixed bag really. The four bands in question were Kicker, The Butterflies of Love , Airport Girl and Comet Gain.

As you will probably guess I bought the record on the strength of the last band and their take on the Dena Barnes recorded If You Ever Walk Out of My Life is okay even though it sounds like it was recorded in someone's toilet and they decided to re-write most of the lyrics.

The Butterflies of Love's rendition of Two Lovers, the Smokey Robinson written and Mary Wells performed ballad is pretty good but again not a patch on the original.

The biggest disappointment is from a band that I really rate however Airport Girl turn the Benny Spelman/O'Jays classic into a virtually unlistenable dirge. I'm not sure wther this is supposed to be a tongue in cheek version or if they were deadly serious whichever it is,  it is good at all.

By far the best track on the ep by far is Kicker's go at covering Since You Left, originally released by the Inciters in 1965. It is not radically different but has that sort of mid 80s Red Wedge/ Big Sound Authority feel about it and makes the ep worth seeking out.

Kicker - Since You Left

I realise that this could very well see me barred from the blog for a week, but I think I prefer the Kicker version. I'll get me coat.

I agree with you Swede

Interesting little release from Fortuna Pop. Like the Kicker version too.