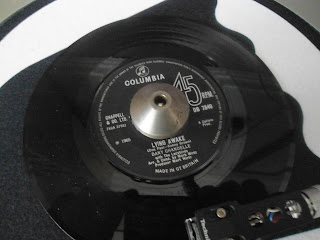 This track from 1965 shows that all of that the influence to music across the pond was not all one way traffic with all of those American mid west teenagers taking the sounds of the British bands such as the Stones and the Beatles and turning it into the groovy garage sounds that have been featuring here for a while. The UK still had much to learn from the production skills of the likes of Shadow Morton and Phil Spector whose influence is writ large in the production of Lying Awake. Mark Wirtz takes an obscure track originally by Bernice Swanson and with the addition of booming drums cymbal crashes and by the sounds of it, the kitchen sink to make a belter of a melodramatic take on the "little symphonies for the kids" When this track was recorded Dany Chandelle, or Jackie LaSalle as she was knon to her parents, was only fourteen. The backing singers the Ladytbirds are famous for their appearances on the Benny Hill show but we won't hold that against them.

Dany Chandelle and The Ladybirds - Lying Awake
Posted by drew at 10:34

OTT, in the best possible way.

You're on fire this week, Drew.

Interesting and informative post, thank you. Glad to also see that Diner is one of your favourite films..