In Praise of Moe 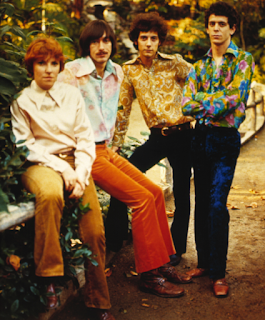 I don't think a week goes by when I don't listen to at least half a dozen Velvet Underground tracks. Over the last while they have mostly come from the third album, the Matrix Tapes box set or some of the better quality bootlegs but sometimes I will revisit the banana album which used to be my favourite and at other times I just want to hear something a bit more brutal so I will stick on White Light White Heat,  in particular Sister Ray or I Heard Her Call My Name. I never really reach for Loaded, the final lp, their only album released on Atlantic. A lot of people cite this as their favourite Velvets album but I have never really warmed to it. There are a few great tracks on there but if I want to listen to Sweet Jane, I tend to head for the Lone Justice version or maybe the Cowboy Junkies one or if in a melancholic mood I will seek out Cat Power's version of I Found a Reason. The versions of Rock and Roll and New Age that do it for me are the live versions from the aforementioned Matrix recordings.

The upshot of this is that I am not overly familiar with the album, so much so that when "Oh! Sweet Nuthin' " the final track from Loaded came on the mp3 player last week it took me about thirty seconds or so to recognise the song but then found my self engrossed in it so much so that I played it threee times on the bounce, not because it is a very good song, which it is but because of just how different it is to the Velvet Underground that I love. None of the noise, the coolness or downright detached coldness of some of the earlier stuff is apparent here. There is a southern, country rock feel to the track to these ears but the most striking thing is the drumming. Yes I know that Moe Tucker wasn't around for this album as she was having a child, but it is quite startling how obviously different it is and I'm pretty sure the track would sound markedly different had she been around. Which begs the question would the previous albums have sounded the same without Moe? Of course they wouldn't have and I think that they would have been all the worse for it. I think that we all owe Moe Tucker a great debt of gratitude as I think that she is sometimes overlooked when considering the Velvet Underground.

I've always loved Loaded, but I know what you mean, because of Moe's absence it has quite a different feel from what came before.

I agree. Loaded is a different kind of album. Their best? Nope, but I still love it, particularly this song, Who Loves the Sun and "the hits." I have a feeling I'll be on a VU rampage the rest of the week. Thanks. No sarcasm. I mean it.

I love Loaded too, despite all its drawbacks. This song is a beauty. So is New Age.

Drew....I've always admitted that I don't know nearly enough about VU. You wouldn't, perhaps the next time, thanks to your work, that you're stuck overnight in some hotel room looking for something to do, cook up an ICA?