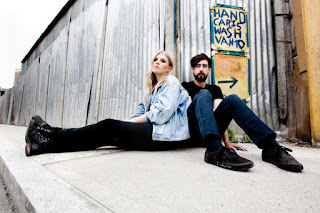 We haven't had anything from Slow Club round these parts for ages. I haven't really had the same reaction to One Day All of This Won't Matter Anymore as I did to the previous album, there are some really good songs on the album but there are also a few that for me are unmemorable and just wash over me. I have hoped that it would grow on me and it may still do but I don't have any urge to listen to it. I have been listening to the second album, Paradise,  from 2011 which is a very good album, quite dark in places and the first suggestions of what would follow on Complete Surrender.  Where I'm Waking was one the tracks released to promote the album.

Anonymous said...
This comment has been removed by a blog administrator.
2 February 2017 at 16:08