This Heart of Mine 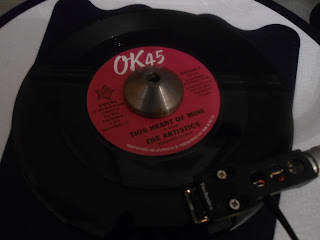 Today's piece of sublime soul isn't as obscure as some of the stuff that has featured here in the past. This one was actually a hit, reaching number 25 in the R&B Billboard when it was released in 1965. The Artistics started out as the backing singers for Major Lance but were then signed to Okeh records as a group in their own right in 1963, however it took two years and their third single release, this one for them to make any impression, however their career afterwards was pretty patchy and they called it a day in 1973 but reformed briefly in 1999 to record some tracks for Ian Levine's much maligned Motorcity Records project. Although this single did reach the charts and therefore must have sold fairly well, copies are scarce and command three figure sums. The song is a great example of male harmony group soul which leaves you with a warm glow even though the lyrics written by Barrett Strong are like most good soul songs full of potential loss and longing.

The Artistics - This Heart Of Mine
Posted by drew at 08:00