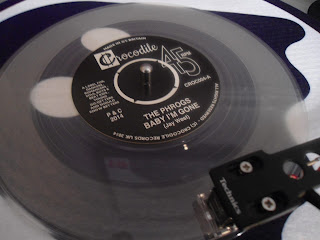 You would be forgiven for thinking that today's frenzied piece of garage rock came out of the Midwest of the USA in the mid sixties. it was actually recorded in 2001 and first released in 2014 and re-released last month on an incredible small run of 200 clear vinyl 7", you can pick up a copy here for a very reasonable fiver + postage. The band hail from Southend-On-Sea and have been on the go since the mid 90s but as far as I am aware have only released this single and a 10" single back in 1998.. The lyrics are a bit rudimentary but the singer's wild harmonica playing makes up for it somewhat. Stirring stuff.

Blimey - that blew the cobwebs away! Marvellous.

Marvellous indeed. Loved it. Even better than Imagination........