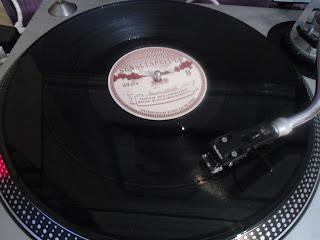 By all accounts I missed a great Fall gig a couple of Saturdays back at Oran Mor. I think I read "a return to form" but I also noted that Smith is still at the buggering off stage of periods of the gig patter and that the band had to drag him back on for the final couple of songs, so no change there then, well a slight change he did come back on and completed a 60 minute set.

What the fuck has this got to do with the title of the post Drew? I hear you ask. Well, the last time I saw the gruppe and decided enough was enough was way back in November 2012 when they played a not too bad gig at the Arches but on top of the previous two shit gigs in Edinburgh I decided enough was enough. At the Arches Dj Twitch was djing and produced a top set of rockabilly, dub and garage. One track in particular caught my ear and it was a dubbed out version of an old Supremes song from 1966 which I knew that I would have to seek out. After the gig I hit the laptop and after a bit of searching found out that the re-edit was done by someone called Manjah and was on a 4 track 12! single which took a bit of time and effort to track down but I was eventually successful. I know nothing about Manjah but according to his Soundcloud page he is located in Athens, Greece not Georgia. The bass on this can  move objects in the room when played loud and I suspect is not too good for the speakers.

Manjah - My Dub Is Empty Without You
Posted by drew at 08:00

I can quite understand why this caught your ear. Great stuff.