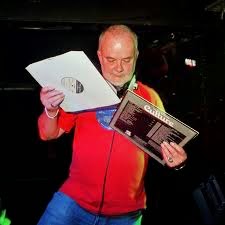 Ten years. Fucking hell! It doesn't feel anything like that long.

I do remember where I was when I learned of the death of John Peel. I was in a rather nice room with a great view of the castle in the Caledonian hotel in Edinburgh. I was getting ready for one of those incredibly boring corporate evenings when you are supposed to "network" get your face known and climb the greasy pole. I just used to to get pished on the free bar, (there still were such things then),  find some late night eatery and then stoat back to my room but I digress. I heard of the dj's untimely death from Eddie Mair on Radio 4's PM. To say I was shocked would be an understatement.

Peel was like an old dependable uncle, sure one you didn't go and see ( or listen to) as often as you used to but you knew that he was still there and would be forever. To be honest I took his presence for granted and over the preceding few years had listened to him a lot less than I had done previously. You see, I had other priorities what with being married, the career and Max, listening to Peel and finding exciting new music had been  pushed right down the list. But every now and again I would tune in,  reassured that he was still fighting the good fight and if I caught wind of a new Fall session,  well I would always listen.

So that night I went to the "do" with even less enthusiasm than normal which was never that much in the first place. I have to admit I got rather angry with the ambivalence that I met with on telling others present of the terrible news. But looking back I'm not sure why I should have been surprised as in the Pharma industry a love for obscure indie, drum & bass,  reggae or death metal isn't the kind of thing that you hear discussed too much, they are all trying to out do each other as to where they went on holiday or the trek that they were just about to embark upon or other equally inane, in my opinion,  topics of conversation. My memory of the evening is a bit hazy but I do remember some fuckwit, at the end of the night hailing a taxi to take him from the Sheraton back to the Cally, all of 200 yards down Lothian fucking road.

Anyway, I have thought long and hard about who to post today and I have decided upon probably my third favourite band and one which I didn't initially discover from listening to Peel but I'm sure Big Mill was listening as he bought the first single which his brother subsequently taped for me, after listening to which I was hooked. I already loved feedback but this was a different kind of feedback a lot more chaotic and threatening than that of  Hendrix or The Who and therefore a lot fucking cooler.

I recently finished reading Zoe Howe's excellent biography of the dysfunctional brothers from East Kilbride, Barbed Wire Kisses" which had me laughing out loud on more than a few occasions but I was totally surprised by the revelation that the brothers hated their Peel sessions, all of which I have always thought to be brilliant. In the book Jim Reid states "The Peel Sessions were the worst. You knew exactly what you wanted to do, but you've got these guys who don't want you to do it"  It is disclosed that they were not allowed to play as they wished and the engineers on the show, for the first session one Mark Radcliffe,  did what they wanted to and made the band sound how they thought they should. This got me thinking, how fucking good would those sessions have sounded if the Reids had been given the freedom to do exactly what they wanted?

For today's tribute to Peel I haven't picked the groundbreaking first session or the astounding curve ball that was the third one which showed that the Mary Chain were not a one trick pony and that below all that attitude and feedback there were subtle and delicate pop songs. I have opted for the 5th session which includes one of my favourite of the band's songs and also a cover version that always makes me smile and which I don't think I am ever likely to get sick of. The session was recorded on 31-05-88 and was aired on 13-06-88.

And here is the great man introducing his favourite band

Superb Fall mp3, Drew. You just can't beat them, can you?

No you can't George however Ctel would disagree.

Great post Drew that sums up why we should never forget the great man. Love the Mary Chain's version of "My Girl".