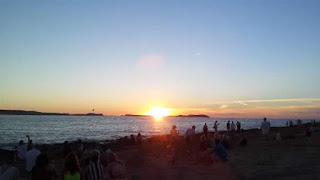 Sorry about the lack of posts for the past couple of days but I have had the joy of spending some time in that most lovely of towns Luton, bugger Provence or Tuscany, if  you want real beauty and culture you must go to Bedfordshire and the food, well it's positively to die from.

So I need some music not only to dance to this Friday but also that will transport me to somewhere that isn't the South of England but somewhere a little more exotic and where better than the Ibiza of twenty five years ago with another track from A Short Film About Chilling and what better than a tune that you can get yourself lost in but which is not essentially a dance track as for the majority of the track there are no beats just a collage of samples stolen from here and there and assembled into one of the most if not thee most extraordinary pieces of music from the early days of dance music and probably the longest titled single ever. I can't be bothered going into the detail around this track but did you know that the title comes from a a BBC sound effects album, Science Fiction Sound Effects No 26 to be exact and it pertains to an effect used in the cult British Sci-Fi programme Blake's 7.

The Orb - A Huge Ever Growing Pulsating Brain That Rules From The Centre Of The Ultraworld (Original Wau! Mr Modo 12" mix)
Posted by drew at 10:26

how did I not know the blake 7 connection

Me either.
Swiss Adam

every day's a school day, as they say.