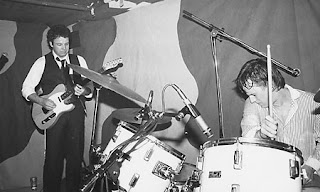 "It's a band that has no idea how to play it's instruments. In fact, they don't even know what instruments are, or if the guitarist can stay conscious long enough to play whatever it is a 'note' might be". Is not the sort of review to instill the confidence of the reader that what they are about to listen to is any good. But that indeed is one of the more positive reviews that The Red Crayola have had over the years since they formed in 1966. The Texan psychedelic rock band were definitely on the "experimental" edge of the spectrum when it came to music making much of the first album The Parable of Arable is virtually unlistenable as it is basically noise made by a fifty strong crew of off their nuts hippies and termed "free-form freak-outs. But when they do get there shit together like on Transparent Radiation and  Pink Stainless Tail (for some of it anyway) the results are nearly acceptable, in that amongst all the noise there was a discernible song.

Hurricane Fighter Plane, probably the band's most accessible song is the track that introduced me to the band. It was courtesy of a not very good cover by Future Pilot A.K.A vs The Pastels which was bought back in 1998 if I'm honest not on the back of it being a record by an ex Soup Dragon and The Pastels but because on the other side was a track remixed by Two Lone Swordsmen. From there I found a version on a live Cramps bootleg after which I sought out the original which features Rocky Erikson of the 13th Floor Elevators on organ which probably focuses the rest of the band. In 2011 a not too radical remix by Sonic Boom was released for RSD which was quite apt as in a former incarnation as part of Spacemen 3 he had covered the aforementioned Transparent Radiation.

The music didn't get any better by Red Crayola's second album which was rejected by the record company on the grounds that it had no commercial potential!

That Sonic Boom version is good.

You, me and I guess at least Stx, Ctel and Moggieboy

Anon - I will need to track that down