Boy's Own Recordings - The Twelves #4 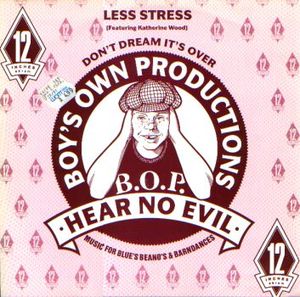 The fourth release by Boy's Own hasn't dated very well sadly. I was never really a fan of Crowded House, I always found them to be a bit wet and so a Balearic remake of one of their hits didn't exactly entice me to buy the record but I did anyway as it was on Boy's Own and at the time it was probably played a few times but not that much since. The b-side had two tracks the first of which has quite a weak rap on it which I've never ripped and the second is very hippy dippy with all the Woodstock samples lifted from the soundtrack album which dates the track even more than the a-side. There was a remix 12" as well which included a Graeme Park mix but I never got round to buying that,

I think that Less Stress were two DJs from London and vocalist Katherine Wood on this track. They also released a record on Wau! Mr Modo, so a nice wee link into yesterday's track but in a different league completely.

Less Stress - Don't Dream It's Over