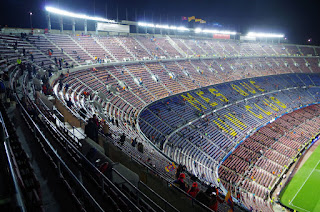 Most probably the only song recorded to namecheck a Scottish referee, well until somebody records "Who's The Mason In The Black?" anyway but that doesn't actually put a name to one, although I know a few people who could list many that they suspect but I digress. Mogwai did not only record a song about a referee but a an official who it appeared to me had a great dislike for my team, a failing that he passed down to his first born, although I think the son is just pish and incompetent rather than having an agenda although I could be wrong.

For the first two days of my honeymoon I was left to my own devices, Lynn having caught a pretty bad case of food poisoning from calamari on the evening of our arrival in Barcelona. The first day between running back to the hotel every couple of hours to check on her I spent most of my time and a wee bit of our money wandering about the record shops of the city of which at the time there were plenty. On the second day I decided to seek out and maker a pilgrimage to Camp Nou as I knew that Lynn would not be in the slightest bit interested in going there once she had recovered. When I eventually found it I discovered that on the Wednesday night there was a Champions League game against Dynamo Kiev. I thought that this would be a great introduction to football for Lynn, who at the time had never been to a football match and duly handed over about a third of our remaining holiday funds on two tickets for the game.

I wouldn't say Lynn was ecstatic at the prospect when I returned to the hotel and told her where we would be going on a couple of nights time but she didn't explode either which I took as a good sign although was probably due to the after effects of the recent food poisoning.

So on the Wednesday night we arrived at the stadium and climbed and climbed and climbed up to near the very top of the stadium behind one goal and sat down. When the announcer after listing the teams that night got to the officials I nearly chocked on my beer as we were informed that the referee for the evening was one Hugh Dallas from Scotland! Was there no hiding place from the man from Bonkle.

The score I hear you ask, what was the score? Sadly this was not a classic Barcelona line-up under the management of Louis van Gaal  and they were gubbed  0 - 4, with up and coming Andre Shevchenko netting a hattrick.

Lynn has yet to attend another football match. Every time I suggest accompanying me and Leo to The Penny Cabs Stadium she just laughs for some reason.

My son does not understand this band- sons are indeed pish.

I'd go along with Anon's comment as a general rule, though the noisy couple of minutes towards the end of this tune were particularly terrific.

This is how I picture it went down. The entire time you were courting your bride to be you hid your obsessions. The day after she walks down the aisle you whisk her off to Barcelona for what promises to be the perfect honeymoon. Now it's safe. You got her. You return to football stadiums and record shops immediately. It begs the question... Just what did you do to that calamari, Drew?

Party In The Dark though- has singing, is ace.

True Sa, I don't agree with anon and The Swede on thiss one