The Dutch Are Weeping In Four Languages At Least 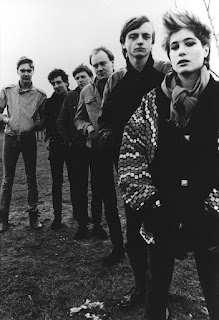 Since his sad death in January this year there have been loads of excellent posts on blogs all over the place. Just yesterday over at JC's bit Jonder posted an excellent ICA rounding up his best tracks of the gruppe's first decade. I was slightly crestfallen when I saw this until I scanned the track listing and to my relief he hadn't chosen the song that I had earmarked for today's post.

I wouldn't say that Tempo House is my favourite track from Perverted by Language, that is an impossible task, let's just say it one of my favourite eight tracks on the album. PBL was the Fall's sixth album, released in 1983 which was also the last to be released on Rough Trade as Smith was completely pissed off with all the focus and energy the label were putting into the Smiths. It was also the album that introduced Brix to Fall fans, although her input on this album was minimal as most of the tracks were recorded prior to her joining. Tempo House is the only track on the album not recorded in the studio, the recording comes from a live performance at the Hacienda as the band were not happy with the studio recording, especially the sound of the bass. I have often wondered what a Peel session of this track would have sounded like as at this time every session they did for the DJ was absolutely brilliant, we can but speculate but one thing for sure it would have been something to have heard this live if the album version and one from the Live in Reykjavik cd also posted are anything to go by.

No. I don't have a clue what Smith is going on about in the lyrics.

I'm way behind on my reading/listening. Thanks for reminding me to check the latest Fall ICA. Top tunes here today too. Enjoying the Reykjavik version enormously.

You're really on it this week Drew.