The Best Pop Record Of All Time 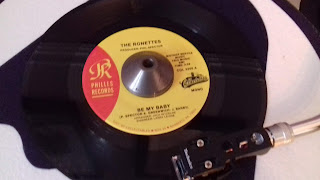 One of the best things about this blogging lark that I have found is the fact that I have met in the flesh some of my fellow compatriots and to a man they have turned out to be, yes we do seem to be all male, thoroughly decent blokes.

Prior to starting the blog I had of course met J.C., only the once like,  but all that followed stemmed from that one chance meeting. In 2011 I found myself, much to my dismay I may add,  working in the Big Smoke, that there London, somewhere that I had stipulated to my boss that I never wanted to work, I could be sent to the furthest reaches of this,  for the moment United Kingdom but please not there! Surely there were others that could cover that place? Apparently not and I found myself at London City Airport on the morning of the 8th of August 2011 not knowing that the city had endured a weekend of rioting as I had only returned from France very late on the Saturday night and had spent the Sunday in a daze sorting out wine and washing. What the fuck has this got to do with the best pop record of all time you ask, not a great deal,  I am just setting the scene.

So for the next wee while I follow the same routine, twice a month I take the Sleeper from Glasgow Central to Euston on a Wednesday night, work at the Royal Brompton on a Thursday/Friday and then take the 17:30 from Euston back to Motherwell where I stagger out of the train  and into the waiting car and L has to listen to my drunken pish all the way home.

This goes on until the beginning of November when I post possible my favourite record of all time, Be My Baby under the title Pop Perfection. JC comments that this should be something that needs to be be discussed face to face, in real life, in the pub and so events begin to happen that ensure that these conversations between sad middle aged men no longer happen only on Blogger but scarily in mano a mano.

I am due back down in London the following week and rashly agree to meet up with Mr H. My hotel is in Kingdom Street, just off the Westway and Davy suggests we meet up in a pub just off Notting Hill Gate I agree not having a scooby where it is. I'm sure he said it's a "stop or two on the the tube" and there lies the second issue I have with meeting a complete stranger from the internet, I don't do the Underground, no way. I think to myself "i'll just sack it, come up with an excuse , too tired  and all will be fine" but I look at the hotel and think again "why the fuck not" and so I eventually arrive at the pub (after getting lost twice while walking from my hotel) I can't remember the name,  and an absolutely excellent night enfolds with the two of us talking pish,  drinking too much London Pride combined with a few haufs and to top it all we decided on the top ten pop tunes of all time, which can be found here. It also resulted in probably the most comments ever posted on any of the music blogs any of us have ever visited, 150 in total.

You may not agree with our choices, I'm not sure by the Friday afternoon either myself or Mr H agreed with our choices but I am still sure that Be My Baby by the Ronettes is the perfect pop 7" single.

My feelings regarding Phil Spector, his music and his antics, well,  that is a discussion for another time.

At the risk of rekindling the whole extensive debate, no 'Wichita Lineman'? Really? Absolutely no arguments with 'Be My Baby' though. A diamond.

Alright there Drewster? It was The Uxbridge Arms!

And as you can see I've accidentally deleted the actual picture of our drunkily scrawled list (along with all my other pics in my Google account which removed them all from the blog - I am painstakingly trying to restore them...it's a work in progress)- you don't have a copy do you?

PS: The Swede: I persistently lobbied for 'Wichita Lineman' but we had a 'both must agree' rule and it didn't make it through.

I'd have to agree over the absence of Wichita Lineman (breaks the "no country" rule?) and would probably have put God Only Knows above The Ronettes, but still a top list, pretty hard to argue with any of them.

Oh is a can of worms.... I enjoyed this first time around. and today.

Brian Wilson would gladly play second fiddle to Be My Baby. It’s his favorite song. I have no problem with the top two. I won’t quibble with certain songs that may or may not be considered pop. My biggest beefs are with Madonna (although I do like her in general) and the Jackson 5. Someone suggested Waterloo Sunset, and that would be in my 10 as well. A Town Called Malice was another one mentioned that just might be right there. That was a really fun comment string.

The Uxbridge Arms, it was a great little boozer. I thoroughly recommend it to anyone visiting the Smoke.

Sadly Mr H, did not have the forethought to copy the picture. I assummed that it would be there on the blog until the servers eventually go down and we are all living back in the dark ages so sometime after March next year really.

Spector leaves a spectre all over this list! I have to say I would need some of Mr. Jimmy Webb on my list and Wichita Lineman is the one. If it's Country, it's Country filtered through the sieve of Brill Building Pop production technique. It's Country enveloped in a Wall of Sound. From the lush, romantic strings to the Morse Code of the keyboards and a Fender guitar solo that hits you in the heart. It's been described as the first "existential Country song." It's just one of the great pop songs of all time.