Your Life Is Like A Broken Shell, It Dosen't Really Matter To Me 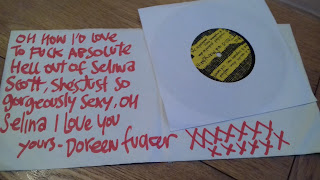 Growing up I loved loads of different music, from the punk that Stiff and his brothers were introducing me to all the way to  Hendrix, Joplin and  stuff that the older hippy types I sometimes hung about with were listening to and also playing when they rehearsed in New Lanark Village Hall. But I didn't have a band that I felt were mine, the closest would have probably been Motorhead but even they seemed to belong to those just that bit older.

It wasn't until late 1984 and the cacophony that was Upside Down that I found what I would consider to be my band. That is not totally correct, I was drawn to the screeching and noise like a moth to a flame from the first time I heard that debut single but it wouldn't be until the following year when the Mary Chain were all over the music press after two further brilliant singles and the release of what for me is still the best debut album of all time that I realised thst this was the band for me. I didn't do the look though, no amount of hair spray would have enabled my hair to look like the Reid Brothers' and I was still a bit of a hippy with my grandad shirts and Levis which would morph into scooter/soul boy but not the indie/goth look which I knew I could never pull off. What chance did you have when Kevin McAllister lived just up the road and looked as though he was the missing fifth member somehow exiled to Lanark.

The other thing that the dysfunctional brothers from EK did was to broaden my musical horizons further with me eagerly seeking out anybody they namechecked in interviews or were compaired to in the NME. It was also no longer necessary for me to keep quiet about my love of the 60s girl group sounds, especially the Ronettes and the Spector Wall of Sound in general, as it was now seen as quite cool whereas previosuly I would have had the urine extracted big time if I had mentioned Leader of The Pack or Baby I Love You.

My love of the Mary Chain waned somewhat when Automatic was released, their sound had changed and I found myself spending more and more time in clubs or fields listening to repetitive beats, I still bought each release but no longer felt the rush I did from the likes of Just Like Honey or Cherry Came Too.  But it would not be a lie to say that Jim and William Reid probably shaped my musical taste more than any other band did. Even now when I listen to Psychocandy I can see myselff walking up past the Science Building with my red Sony Walkman in my pocket listening to You Trip Me Up or Never Understand way too loud.

I still get goosepimples and shivers when I pull out this single and blast it out.

The Jesus and Mary Chain - Upside Down
Posted by drew at 08:00

Selina Scott bought me a drink once.

Top pot Drew. I like the idea of 'The band that shaped my musical taste more than any other'.

Great post Drew. I loved this magnificent, cacophonous dim from the very first moment I heard it, though for me personally, practically everything that came after was a bit of an anti-climax. The only other J&MC item still residing in the collection is the 'Sidewalking' single.

Psychocandy has always been my go to. They were a singles band for me after that. Not a popular view around these parts, I know.

Great piece of writing......captures perfectly what being a fan is all about.