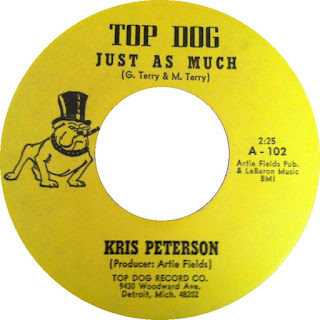 A bit of Blue Eyed Soul today, out of Detroit.  Kris Peterson released eight singles on a few different labels. The one we are interested in is the 1966 release on Artie Fields Top Dog records. There is no mistaking where the track was recorded, it has the Motor City written all over it. Quite a rare record and from one of the soul forums, Kris herself mentioned that there are no known copies lying about and all of the Tog Dog masters had been destroyed. She also said that by 1968, the scene in the US changed and the "black" radio stations would not play blue eyed soul. Peterson moved to New York, where she did some backing vocals on a Frank Zappa lp but then gave up the music businnes entirely.

Sounds like we were robbed of a talent. This is so in my wheelhouse.