The Tracks of My Year 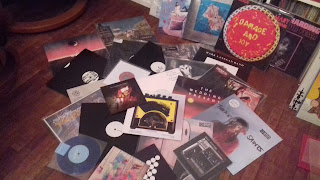 Yip it's back, the most self-indulgent post of the year, the new tracks by which I mean the ones released over the past 12 months that I have been playing the most and are therefore my favourites of the year. This list does not include any of the garage/psych which I really got back into this year and if the truth be told became slightly obsessed with. It is about time that somebody wrote a trainspotter type book regarding this music but I digress.

Back to 2017 then, in the previous eight years that I have compiled this list only one person has featured on every one and it would be incredibly stupid of me if I missed him out this year.  In fact he has been so prolific that he could have filled half of this table easily but I limited Mr Weatherall's contributions to five, one original and four remixes which proved to be an extremely difficult task. Jamie xx/The xx only missed the first year and that was due to my late bandwagon jumping with them that didn't happen until early 2010 but a remix by Jamie xx of his band ensures their entry this year. As for the top spot, I honestly cannot decide between either of these instrumental Wedding Present tracks, one day Northern Ireland is the one, with its frantic tempo that eventually slows and then those wonderful horns, just about perfect and the next it's the almost mournful beginning of Scotland that grabs me and keeps me enthralled til the end and sends me home with that familiar feeling of almost glorious defeat that anybody that follows the national team can identify with, wonderful stuff. Even the Mick Head album hasn't spent as long on the turntable as this 12" single but that is due to the Home International ep coming out in April whereas Adios Senor Pussycat was the middle of October.

I would like to make special mention to Elizabeth Morris' new project Elva. Tailwind has such a beautiful laid back vibe but why is Morris not the lead voca

Could you post the Goldie track tomorrow as it's Friday? Please.
Swc

number 1 and 2 are the Wedding Present tunes. Which version of Goldie do you want his or the Burial refit?

Plenty of goodies in there Drew.

I'm only about 50-50 on songs I have heard versus not heard. Going to make my way through these this weekend. Having said that, there are plenty from your list that will be on mine as well, including Elva, the Regrettes, Just Joans, Michael Head and Luxembourg Signal. I was trying to think about what you picked up at Mono that day we visited Stephen... was it Slowdive?

Slowdive and Mark Lanegan Brian. I still wish I had picked up that Breakfast Muff 7"

Excellent list! You have a few in your 40 that just missed my 50. I'm going to do my thing and draw mine out over 5 days just before the New Year. I am very curious about a few mixes I wasn't aware of or haven't heard yet, so thank for all of this Drew!!

That Curtis Harding album is so underrated, glad to see a song from it made your top 40
Haven't listened to new Wedding Present, but loved the song Bear from 2016's Going, Going LP

I forgot about Breakfast Muff.

Invest in The Home Internationals ep Chris you won't regret it.