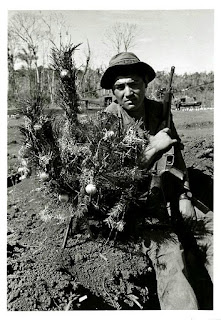 I think of the lousy Christmases I've had in the past, put them all together and they would still pale into insignificance next to being thousands of mile from home spending it fighting a war.

I really don't think that John Wilson and John Wessler were exploiting the fact that there countrymen were spending the festivities in the jungle or on a muddy base camp. The vocals on this the only record they released are far too heartfelt and emotional for that. I think that it was a plea for the people back home in 1966 to spare a thought for those not so comfortable in South East Asia.

Johnny and Jon - Christmas In Vietnam
Posted by drew at 16:12