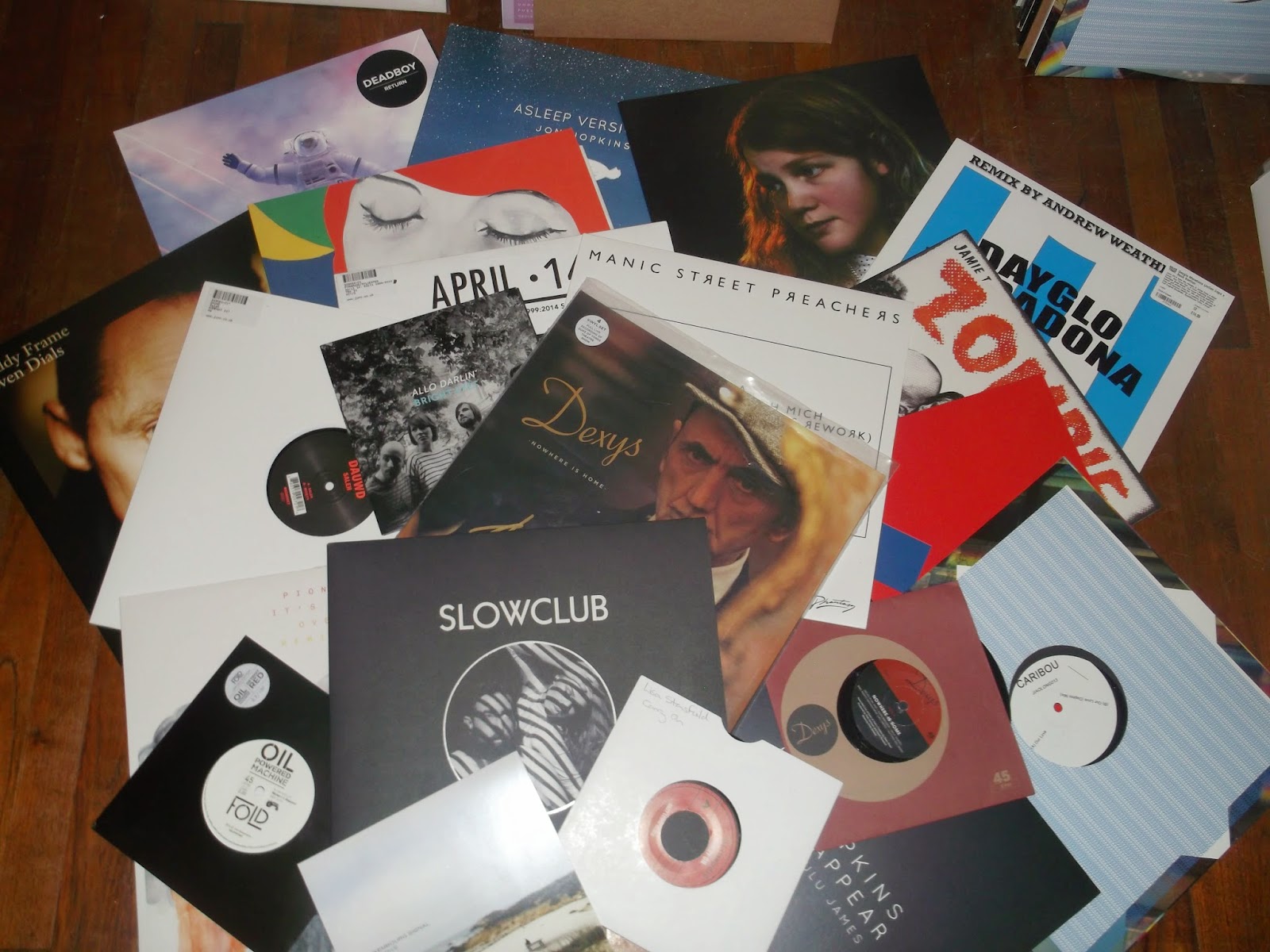 2014 has been a rather good year for music in my opinion which is borne out by the lack of a balance in my bank account and the ever increasing vinyl offending L's eyes in the dining room. Probably the main benefactor from my largesse was Piccadilly Records who's service cannot be faulted and then to a lesser extent Monorail, which unfortunately I tended to visit when I went into the town on the scooter without a back pack big enough to carry vinyl without damaging the covers meaning that I was limited to 7" singles.

The list has taken a while to compile and is far more balanced between dance and indie/rock than it has been for the last couple of years. You will notice that one band have three entries in the top ten, overkill you may think but I really can't stop playing these tracks and I had to limit myself to three tracks from the album, if not I think that all bar one would have been in the chart.. The Burial record was technically from last year but it was released after I compiled my list and it is far too good to be forgotten about. I have not picked specific tracks from the Jon Hopkins Asleep Versions as I find it difficult to differentiate between the tracks and tend to think of it as a single piece of music. Also you need to hear the 21 minute version of This Is What She's Like, recorded live at the Duke Of York's Theatre it is nothing short of epic.

I didn't partake in Record Shop Day this year, as after checking out the list I didn't see anything that warranted getting up at the back of five but I have to admit that both Max and I did miss it, however both of us ended up all right as the following week we went into the town and I picked up most of  the stuff that I had been vaguely interested in and Max got to go to Forbidden Planet anyway.

There has been one worrying development this year, a few of my favourite tracks, three to be specific have had to be purchased as downloads as that is the only format on which they were released.  I am not wholly comfortable with this and nearly excluded them on that basis but all three were really too good not to be included. Oh, and one track was never released at all and I had to do something I vowed I would never do and rip it from Youtube but I really couldn't be arsed with having to be on a computer every time I wanted to hear it. I hope that these occurrences are just anomalies and not a portent of the future!

So below is my list for 2014, I hope you find something there that you have never heard before, investigate and buy.

You always get in there early with your list Drew, leaving the rest of us in your wake. Good list and a few things I need to check out.

You will not be disappointed CC. I may have to buy a new copy of the vinyl soon as it is rarely off the turntable.

Like always - a good list Drew, and a many things to check out. And Slow Club will be my first.

I will be honest and say that I have not heard most of this list Drew but, as mentioned a few weeks ago, the Slow Club album is a great album that is certainly up there vying for best album of 2014. The album was completely ignored in the year end rundowns in both Mojo and Uncut.

Love that Kate Tempest track. First time I heard it I had to turn the radio up loud in the car. As soon as I got home found it on youtube and played it on repeat. Very clever but not sure I would like a whole album of her in one sitting.