My Albums Of The Year 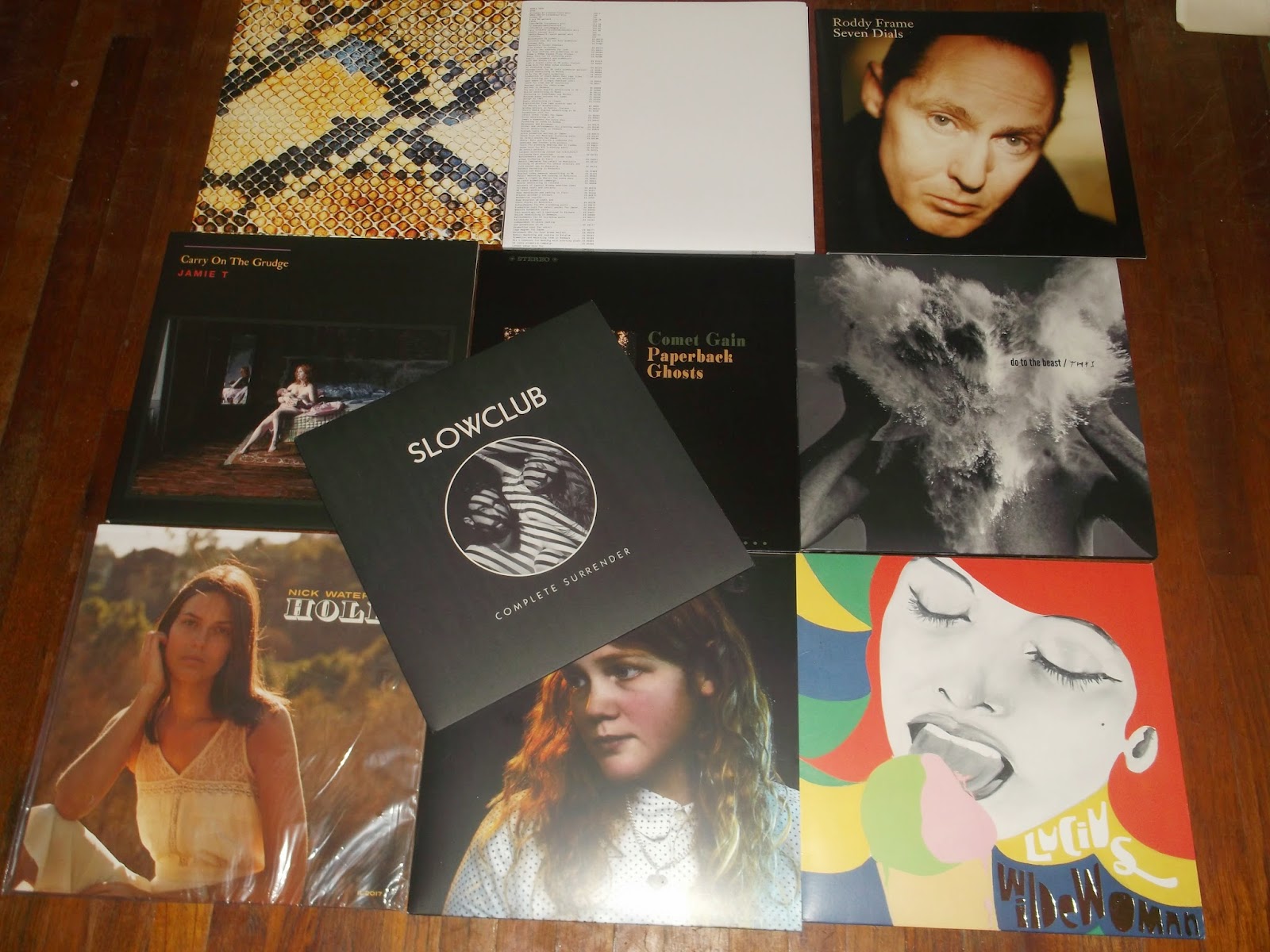 2014 was a pretty good year album wise for me. There were quite a few that I was eagerly anticipating the release of from old favourites like Roddy Frame and The Afghan Whigs to debuts from the likes of The Amazing Snakeheads. Most of those I have bought since the end of September/beginning of October haven't had a fair listen as since then turntable time has been chiefly hogged by two albums. In previous years the albums by Caribou,  Allo Darlin', Cold Specks and the Fat White Family would have made the top ten, however not this year. I suspect that if I had first heard of Coves earlier in the year, Soft Friday would be in there too as the more I listen to it the better it gets. My second favourite album of the year has been ruled out this list as it is a live album from a show recorded in April of 2013 but Nowhere Is Home by Dexys should be in everyone's collection as it is stunning. I am really envious of people like Davy H who saw this live as it must have been something quite, quite special. Another notable mention must go to the soundtrack of Under The Skin by Mica Levi which is quite disturbing and eerie and not the most comfortable of listens but still pretty rewarding.

Jamie T returns after a five year break, a bit calmer with more actual singing than on the previous two albums but the old Jamie T returns on tracks like Rabbit Hole and Zombie.

9- The Afghan Whigs - Do The Beast

Greg Dulli resurrected his original band for another foray into the sleazier side of life. At times Dulli pushes his voice to its limits which can't be doing his vocal chords any good but sounds great in the mix of rock and soul that this band always did so well.

It has always saddened me that Comet Gain aren't better known. Possibly this is due to the fact that there sound changes so much, sometimes pretty punky and thrashy and at other times beautifully crafted indie pop full of melancholia. This album has quite a lush full sound to it with some lovely orchestration. I have heard it compared to Belle and Sebastian and to a certain extent I would agree but for me there is more consistency about this album than there is on most B&S records.

The second album from Nick Waterhouse proved the old adage "if it ain't broke, don't fix it" More retro Rhythm and Blues for late nights in small dark clubs. Also Waterhouse's performance at King Tut's was gig of the year for me just sorry that the place wasn't fuller.

I happened on Lucius by chance when checking through Youtube for The Afghan Whigs KEXP live session and am really glad that I did. The band's sound and the look of the two front women harks back to 60s Girl Groups. The album contains lots of lovely harmonies and a really nice guitar sound especially on Go Home. It does dip slightly around the end of side one but overall a very good debut.

Possibly the release I have awaited with the most anticipation for a long time and which initially really disappointed me although that may have something to do with having extremely high expectations which I suspect would have been impossible to meet. It has grown on me hugely however I fear I will never learn to love Postcard it is just too horribly Fleetwood Mac middle of the road pap. Sorry Roddy.

Out of the blue, or so it seemed came a new release from Richard D James. Unmistakeably Aphex Twin but not envelope pushing but still streaks ahead of most producers of electronic music. An album that we didn't know we were waiting for but now it's here it's one that was needed.

The soundtrack to a night fuelled by Buckie, weed and speed.

Brought to my attention one Saturday afternoon when she performed a live session on Gilles Peterson's show on 6Music. I immediately went onto the Ninja Tunes website and bought the album. I suppose it is a concept album as it tells the story of the lives of three people trying to get by. The music by Dan Carey never overwhelms Tempest's words but compliments them. There have been comparisons to The Streets, A Grand Down Come For Free, however the narrative here is far more believable than Skinner's.

To say this album surprised me is like saying Usain Bolt is quite good at running . The more I listen to it the better it gets and it has been played a lot over the past couple of months. Strangely none of music papers or the websites have mentioned this album. It must only be me, Scott, George and CC that rate it but it is an album you need to own. Trust me on this.


Shit! I forgot about the Woodentops, Granular Tales.
Posted by drew at 08:00

Trust Drew (and Scott, CC and Me)!! The Slowclub is a must-have! It's one of the very few releases of the last two years I have bought, Drew, and it's a belter.

David, quite a few people I know have said that they really like it. Not sure why I took against it so passionately but I really can't abide it for some reason.

Good list Drew. I need to spend sometime listening to Slow Club, haven't really given them a chance yet. The Roddy frame album didn't do much for me on the first few listens. Maybe I need to try again
Swiss Adam

What a fresh list! Really interested in hearing Comet Gain. Missed that one completely. Have to go with FORW on Postcard though... Thanks for featuring Slow Club a while back. I'm another one of your converts that would have never picked that one up.

Thanks for an entertaining year of music, philosophy and bullshit Drew. Always the place to look for good sounds, your page, As discussed a few years back, I'm travelling a lot these days and the anchor provided my yourself and S.Adam is a must for me

A very interesting list, a couple of things I don't know at all (Comet Gain, Lucius), but will check out on your recommendation. I'll also give the Slow Club another go. I enjoyed 'The Pieces' and a couple of others, but struggled elsewhere.

Great lit Drew - and The Slow Club will appear on my list as well. Thank you for the inspiration you and Adam gave me during the last years. Still following your post whereever I may stay. Keep on posting.

Anto, glad to be of service.

Swede , it may grow on yet but maybe not.

Thanks Walter for your kind words.