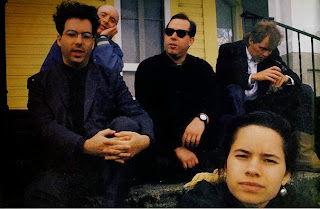 I was listening to Master Tapes on Radio 4 where John Wilson was talking to Natalie Merchant about Tigerlily,  her first solo album after leaving 10 000 Maniacs. It is an album that I have to admit that I haven't played much over the past decade or so and it was the last of her output that I bought as I wasn't really that taken with it I much preferred the stuff she produced with 10 000 Maniacs.

So last night I was mostly listening to In My Tribe, my favourite of their albums and I was instantly transported back to Aberdeen and the first half of 1988 when this record was never far from the red Panasonic ghetto blaster with the turntable on top.  I thought that I would post the last track from the album, the absolutely beautiful Verdi Cries which also turned up on the b-side of the single What's The Matter Here?

They recorded their first songs where I went to college. Saw this band in tiny college bars, Natalie talking in a fake voice. Singing and screaming with her back to the audience. You could sense they were going places though.

Jo liked this track, She recognised the distinctive voice!

Not heard this in ages. Gorgeous song made me get out in my tribe from the loft