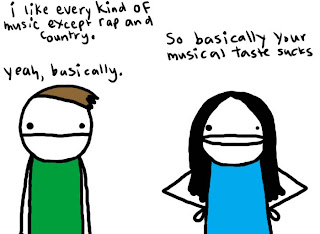 This year has seen me retreating further from indie rock and going back to listening to a lot more northern soul and buying a lot of new dance music thanks to Boomkat.

I don't know what it is about me and indie music at the moment but I find it hard to be enthused let alone moved by the majority of what I have heard this year. It could be that my ears are getting old but most of it sounds the same to me. There have been exceptions such as the albums by Allo Darlin' and Lucky Soul and the brace of singles from The Pains Of Being Pure At Heart but apart from these I can't think of much that has been memorable.

I also seem to have developed an aversion to albums, not buying them,  but listening to them in their entirety. Apart from the latest  by the Fall and Meursault I don't think that any of the other that I have bought in 2010 have been listened to in one sitting more than twice. I don't know if it's my concentration span that has gone due to either age or the effects of having the ipod on shuffle but I seem to get bored half way through most things these days.

I think that part of the problem and this has undoubtedly been discussed to death in other places,  is that albums these days tend to be far too long,  too much filler. I don't think that it is coincidence that the two albums that from 2010 I can listen to over and over only contain 10 and 11 tracks.

A notably mention has to go to Metallic Spheres by The Orb and David Gilmour a project which had the potential of ending up it's own arse. I've read people say that this is a return to form from The Orb. I don't agree, as last year's Baghdad Batteries saw Alex Paterson and Co back doing what they do best and this album is just a continuation from there.

Anyway here is my favourite tracks of the past 12 months, three of which can only be found as a download, no physical product being made as yet.  In the past that would have ruled them out of my lists but times have changed. The Jessie J track will come out in a physical format at some point I have no doubt, the Kills track may find it's way onto a future b-side or something and I can but hope that John Talbot's remix of Shelter makes it onto twelve inch as if not it would be such a waste, it could be the track of next summer.

Sorry no tracks available to listen to anymore as some short sighted git has complained and have had a DMCA takedown notice. Guess you won't be able to listen to find out if any of these tracks are worth buying.

Email ThisBlogThis!Share to TwitterShare to FacebookShare to Pinterest
Labels: best of, lists

I looked through the rough trade and nme albums of the year, there were hardly any Id even heard, never mind the loads I hadnt even heard of...

My year has actually been filled with chart stuff, which is the first time for years,.

Great post. Well written. Interesting choice of tracks, most of which are unknown to me.

As for albums, I don't think anyone exects them to be listened to all the way through anymore, so they don't try to cohere or flow as before. The Orb thing is an exception. Still can't work out if I love it or think it indulgent arse. I vary in my opinion by day.

I gt Piccadilly records albums of the year booklet today and relaised I'd only got 3 or 4 of their top 100, so I guess I'm way off the pulse beat. There's quite a few i your list I'd agree with, and loads I've not heard. I'm going to have to go and look for the Fuck Buttons Alan Vega remix soonish. Agree about Pilooski's AAA- it's lasted the whole year for me- outstanding.

Ctel - I will be posting the Redshape track soon a really good bit of minimal tech house.

Simon - what kind of chart stuff?

Plan B's Stay Too Long is my track of the year.

Oh and then there's Weller I guess. I've not really liked much I've heard that wasn't mainstream this year. Lots of old stuff on the stereo at home.

There are some other things, Kate Nash, KT Tunstall, and Laura Marling have all made decent albums, but no album got me this year like Jamie T did last year.

Some more - Kelis, Alicia Keys, Kate Nash and KT Tunstall, and the Kele from Bloc Party album. That is a superfine electronic with songs album.

The XX remixes have been good. The Gorillaz album was disappointing. I've never really been an Indie kid.

I think that I'm coming to the conclusion that I'm not really an indie kid either, more soul and house and also a singles person rather than albums. It has taken me a long time to come to these conclusions.

Another major fave this year was Tinie Tempah's Pass Out, absolutely cracking single, in my head at least it sound like what I imagine 2 Tone would sound like on the 21st Century..

Lummee, I suddenly feel right out of touch. Hardly know any of those. I must punt my mate Jack Gestures best of year CD tracklist your way. I'd be interested to see what you thinks

I must be off the pulse also as there are a lot of tracks here I have not heard of but will certainly seek some of them out. These lists are always good for finding stuff you may not know...

I'm certainly not on the pulse guys. I had a look at Piccadilly's list and I don't have that many either.

I've checked out a few EOY lists and not many records appear in multiple places.

"I don't know if it's my concentration span that has gone due to either age or the effects of having the ipod on shuffle but I seem to get bored half way through most things these days."

Me too for the most part..