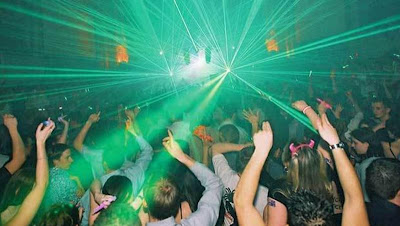 As I mentioned before during the late 80's I had a few scooters and was part of a scooter club. At that time there were 5 or six clubs within a twenty mile radius of where we lived with numbers ranging from 7 to 8 (our club) to some with more than 20 members.

Every so often clubs would organise dances if they could find a venue willing to host one of these nights. Not as easy as you would think , as these functions fuelled by testosterone and beer frequently ended up in violence between rival clubs, NF skins or more often than not locals looking for a rammy to end the night and scooterists being what they were, only too happy to oblige.

I was in Aberdeen at the time when a friend called and asked if I fancied coming down for the weekend as our club was organising a dance, oh and could I bring some records as I would be djing.

I had been to a few scooterist nights and knew enough of their tastes to know that I had the soul, punk and 80's indie records covered but would have to borrow some psychobilly to keep the nutters happy.

The night was going well I had dropped the relevant northern stompers, punk classics and a couple of Meteors and Cramps tunes. I decided it was time to delve into the box of the latest things I had been buying, which I had been played at the Pelican Club in Aberdeen and educate the scooterists. Bad move. Within a minute of the song that I am posting today starting I had cleared the dance floor and was being pinned against the wall by a particularly upset Globetrotter (an infamous scooter club from Glasgow who prided themselves on their thuggish reputation) who told me in no uncertain terms what would happen to me if I didn't get "that gay pish" off.

Needless to say no more House music was played that night or at any other scooter nights I attended until about 18 months later when the Madchester hype began and the nights were full of baggy anthems and selected House tracks.

Great story. I always forget the psychobilly element to the scooterist side. So camo trousers, MA1 covered in beer mats and DMs was that you then?

Levi 501's, Green MA1 no patches or beer towels, ox blood DM shoes and a flat top.
We had loads of psychobilly types, only 1 mod in our club, they tended to have their own clubs.

There was always a lone mod. Any goths?

I was the last person I knew to still look like a Mod for quite some time. Thankfully things like 501s and DMs and MA1s became part of the mainstream, so I just let my hair grow...

I was the lone mod amidst a crowd of goths at one point. But only because the goth girls were better looking than any of the other girls I knew.

Meanwhile...bit by bit my vocabulary builds; I am now able to assemble whole phrases - 'It's too dreich for a rammy'. Nice one!

We did not tolerate goths, far too bloody miserable.

You know what they say Davy, "every day's a school day".

You could forgive Amanda for being miserable when she looked like Kate Bush.