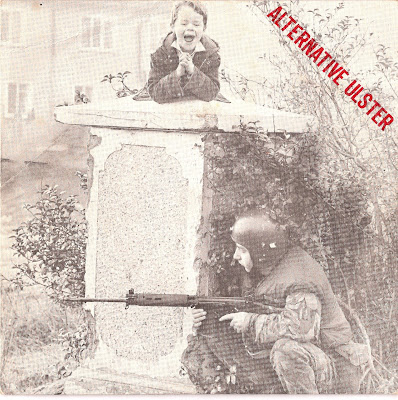 My love of Stiff Little Fingers goes back to 1979, when I bought the single Alternative Ulster from a stall at Wishaw market. I bought it as much for the cover, showing a boy shouting as he hung over a wall with a British soldier crouching below him, as I did for the music. I was aware of the track as my cousin Kevin ( I shit you not) played it all the time. By the time I bought it, the single would have been about a year old and was the second record I ever bought.

The following year we moved to the town where I still reside and started a new school. On the first day of term the boy in front asked me what music I liked. When I told him that I liked Motorhead he laughed but when I also said I was into SLF he smiled and we have been friends ever since not withstanding the odd fall out concerning a member of the fairer sex.

Over the years there have been many debates between the two of us over the merits of certain SLF releases, Listen and Silver Lining being prime examples. The main disagreement, however came when the band re-formed and did the "No Sleep 'til Belfast" tour. S wanted to, and indeed did go and see them but I refused saying that there was no way that I was going to see a "cabaret band".

For years on and off S would suggest going to see them at the Barrowlands on their annual St. Patricks night gig but I would always have a reason not to go until last year when I relented and said ok. It was to be their seventeenth year on the bounce.

I really didn't know what to expect but I had built up this picture in my mind of a band living on past glories and just going through the motions.

The sense of foreboding increased on entering the Barrowlands Ballroom and being confronted by the site of hundreds of forty plus year old punks in bondage trousers etc.

Pete Docherty once sang "there are fewer more distressing sights than that of an Englishman in a baseball cap", well there is Pete, a middle age Scots man with a mohican, a face covered in spiders web tattoos and a swastika t-shirt.

The support act were a Clash tribute band, the less said about the better.

By the time SLF came on I was ready to go home, the support had been shit and the air of malevolence in the hall was palpable. But from the opening chords of Tin Soldiers and simultaneous volley of pints fired from the back of the hall I was hooked and have to admit that it was one of the best gigs I've ever been to in my life. I'm not sure if I was caught up in the nostalgia of the whole thing but hearing singles Suspect Device and Nobody's Heroes live for the first time after all those years was quite special and there was more than one hair standing up on the back of my neck moment.

Did I have a good time? Yes.

Would I go back again? I have thought long and hard about this, no.

Would I recommend it to anyone else? Definitely.

So, happy St Patrick's night to all. SLF will be at the Barrowlands for the 18th year in a row.

The following tracks were recorded in 2006 at the Barras and can be purchased here.

Email ThisBlogThis!Share to TwitterShare to FacebookShare to Pinterest
Labels: SLF

I've talked about SLF elsewhere; but who cares!?!? I love SLF, Tin Soldiers is a stone cold classic that I could listen to over and over again. I saw them play live in 1991 with Foxton on bass and it still is one of the best gigs I've ever been to. Dancing on the bar with a six foot skinhead, snogging a model called Samantha. Did I mention I was very very drunk? On beer, but also on the energy that filled the place.

Just wimped out following an afternoon session on Murphys. City centres after 9pm are for young pups!