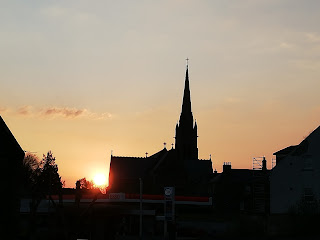 Going back a bit here. On Twitter Richie posed the question "what was your favourite stadium gig?" I have never been to a stadium gig as such, frankly the idea fill me with horror;  far too many people, no personal space and being the length of a football pitch away from the stage is not a prospect I found enticing and that was prior to the current situation.
When I was a lot younger i did attend a few gigs in Arenas with a pal and his day courtesy of Harvey Goldsmith, who was a friend of my pal's dad. I saw Bowie at Wembley Arena and also Roger Waters Pros and Cons of Hitchhiking at the NEC Birmingham. The Bowie gig was amazing as we were pretty close to the stage up to the right and Bowie was of course absolutely brilliant. But I have vivider memories of Waters gig, possibly because we were so close to the stage, the fourth row and also it was the first time I had been to a gig with any sort of added visuals apart from just lighting, there was a huge three panel screen the length of the stage which projected both Gerald Scarfe's animation as you would expect but also live action sequences directed by Nicolas Roeg for the Pros and Cons half of the show and for the old Pink Floyd tunes there was footage that had accompanied performances of those tracks on Pink Floyd tours. It was all very impressive to a fifteen year old boy who apart from the Bowie gig the previous year had only ever experienced the Glasgow Apollo.
I still remember the set list as the first half  contained some of my favourite Pink Floyd and opened with a haunting extended version of Set The Controls For The Heart of The Sun. The version posted is not from the specific night that I was there but from New York on the second leg of the tour the following year
Roger Waters - Set The Controls For The Heart of the Sun (Live 1985)
Posted by drew at 10:40

I've seen a number of stadium gigs in my time and the only guys who successfully reduced the huge, ungainly experience to one of small club intimacy are Bruce Springsteen & the E Street Band. I'm not sure if they'll ever tour at the same level again, but they are the one and only act I would unreservedly recommend to anyone, regardless of whether you like the records or not.

Springsteen was the one I would go to but by the time I had decided that I would go to Hampden the last time the tickets were sold out.