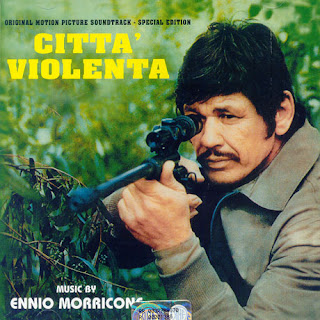 I posted this way back in the early days of the blog.

If there is anybody who could be said to be a better film scorer (don't know if that is the correct term) than the sadly departed John Barry then it would have to be Ennio Morricone, from his spaghetti westerns through the Mission to Cinema Paradiso they are all classics. My personal favourite has got to be Once Upon A Time In America, bits of which I used to drop into mixes all the time when I thought of myself a bit of a budding Weatherall back when delusional in the early 90s.

There are probably loads of scored by Morricone that I have never heard of. Today's track being a case in point it comes from the 1970 Italian film "Ciita Vioenta", Violent City or otherwise known as The Family which starred Charles Bronson and Jill Ireland and was set in New Orleans. I have no recollection of ever seeing this film but if it was ever on terrestrial telly when I was a teenager there is a good chance that I did as my father is a big Bronson fan!

I discovered this track on the Cherrystones compilation which I bought as David Holmes had something to do with the compiling. Most of the tracks on the cd were new to me but all are really good even the Cher track, a cover of I walk On Gilded Splinters and worth the five and a bit quid it is now going for on Amazon. It was more than double that at the time of release.

A beaut', a peach and a pip - Cherrystones 2 is worth bagging as well. On the riff of niche genres - I must post something from my all-girl-Brazilian-post-punk section

I did buy the Cherrystones 2 but prefer the first.