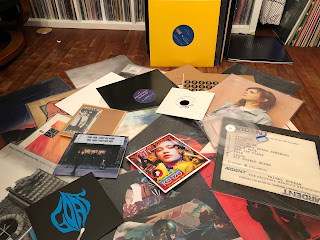 Right here we go, time for what some have called the most indulgent post in a year of indulgent posts and I'm not going to argue. I like lists and I like compiling lists too. I was looking back at this list from previous years and there is a definite shift  away from the what would I suppose be termed as traditional "indie" to heavier, guitar based sounds that are generally longer. but still mixed with a large dollop of dance and a couple of bits of pop thrown in for good measure. This is also the first year since 2010 that their has been no presence from The xx in any form, not even a remix of somebody else by Jamie xx, if he has been active over the past 12 months then I have not heard it. Andrew Weatherall keeps up the record as the only artist to have featured on every one of my yearly lists. Although he has been slightly less prolific than last year he has still cost me a pretty penny. He could have easily made up a quarter of this list but I have limited him to three entries. I suspect that Lord Sabre will feature more prominently over at SA's Bagging Area when he gets his arse in gear.

It was pretty apparent from the first time that I heard SX1000 back in March that it would take something really special to usurp it from being my favourite track of the year and so it proved to be not even a highly anticipated Spiritualized album or a return to best form by the Orb produced anything that could create a bigger grin or hold my attention the same. Not even continual playing on YouTube prior to actually getting my hands on the 12" could sicken me off of first single from the Lucid Dream's 4th album. Magic stuff.

Good stuff CDrew, SX1000 is a worthy track of the year. My arse will be in gear at some point soon- had a very busy week at work and my list making isn't finished.

It's good but not one of Four Tet's best.

A few here that should have been considered on my list. Grr. You never remember when it matters. Well done, Drew.

Some fantastic choices there. A very strong year for alternative music