Step Into My Heart 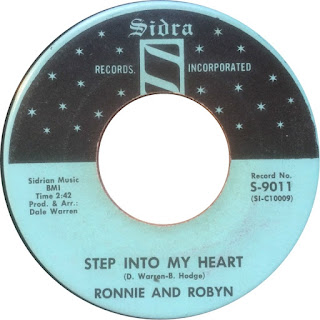 I know nothing about Ronnie and Robyn other than they recorded four singles between 1966 and 1967 three of which were released on the Detroit label Sidra. Step Into My Heart is the best of the tracks that I have heard by the duo, it's just a really lovely piece of soul. It was the flip side to as far as I can find out the couple's final single,  As Long As You Love me which doesn't really do it for me, it could have something to do with the harps at the beginning.

Not a bad way to start what will be a busy week.