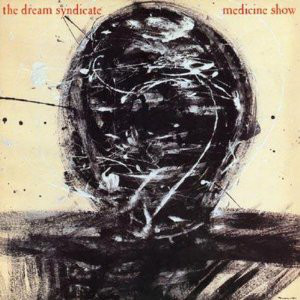 At the tail end of last week over at The Bagging Area, SA featured a rather splendid mix from a festival in Italy by a dj that some of you might be familiar with, a certain Mr Weatherall. Well known for his eclectic mixes  on this mix he had the young Italians jigging along to the some top tunes including a track that I have not played, I'm ashamed to say,  in what must be a decade but which I used to love, John Coltrane Stereo Blues by The Drean Syndicate. So I thought that I would post it unmixed here but I didn't get round to ripping it from the 1984 album Medicine Show but I did remember seeing a KEXP clip on Youtube a couple of years back where the reformed band did an absolutely belting epic version of the song which just so happens to break into a verse or two of a Doors song just over half way through which is quite funny as I found myself reapraising the Doors a few weeks ago and to my surprise actually quite enjoying the experience, they weren't as wanky as I remember them being. This version of John Coltrance Stereo Blues is the business but the band sadly these days look like a bunch of Maths and Physics teachers trying their hardest to be cool but boy can they play!

I'm In Luton for the next couple of days, which is nice!

Its a fucking great song. That live version is good. The band could look worse- they could look like history teachers.

BTW- if you can find the time to rip the song I'd be grateful.

That is a great song. I need to add that maths teachers were always a pretty damned cool bunch, unlike those geeky physics lot.