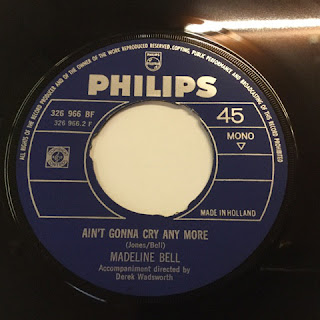 When Madeline Bell's name is mentioned I am instantly stransported back to the back room of some shady pub in Lanarkshire around 1986 - 89, where the smell of 2 stroke  and the threat of violence hung heavy in the room. Picture Me Gone was a staple of those Scooter dances and one of the first "northern" singles I ever bought. Ain't Gonna Cry Anymore, I'm not sure but I don't think was ever played at any of the do's we attended back then but was probably spun at Mod nights which I avoided not being of that persuasion. The track was the flip side of a Netherlands only release, making Help Yourself quite a hard to find single.

We love your scooter dance stories. This is the perfect soundtrack for the experience.

Blimey, that's a tune isn't it?

GREAT stuff! A "new hear" here. Anymore by this artist would be GREATLY appreciated!! WOW!!