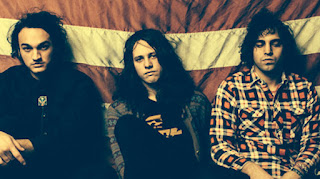 It's not very often that you can say that John Coope Clarke introduced you to some new music but last week he did that very thing when doing an excellent job as usual standing in for Jarvis Cocker on the Sunday Service on 6Music. He has introduced me to some great music from the past that I have never heard before or reminded me of tracks that I should not have forgotten about but genuine new music isn't really what his show is all about. He played Bad Love by Night Beats which got me scurrying to Piccadilly Records and sure enough the album that the song was from was there and I remembered seeing it a while ago and being intrigued by the description, put it on my wish list and then forgot all about it. So  after last Sunday's show I decided to find out a bit more about Night Beats and had a swatch at YouTube to see if the rest of the album was as good as the track the Bard of Salford featured and guess what  many of the tracks were even better. There is a definite garage rock feel about the album and I get the 13th Floor Elevators comparisons but the album is way more than just an homage to the kind of music that has been posted on this blog on a Tuesday for that past while. It is well worth checking out, trust me on this one.

For all I know you probably already know all about this mob from Seattle as Who Sold My Generation is not their first album but there third. Apparently they are named after a Sam Cooke album. I have a feeling that I will be purchasing the back catalogue when I am a little less fiscally challenged.

This is you through and through. Happy to hear they are getting a good airing over there.