Heaven Must Have Sent You 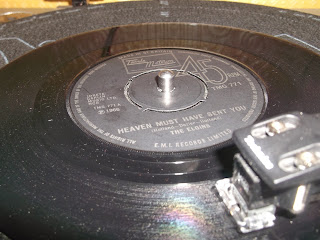 I haven't posted that much Motown on the blog but I do love a bit of Detroit's best export.

The Elgins went through at three name changes before they settled on the name that with the aid of new female vocalist, Saundra Mallet would lead to them having a couple of hits on Gordy's label. The first single Darling Baby got to number one in the Billboard R&B Chart but it was the follow up that the group would be remembered for. First released in 1966, Heaven Must Have Sent You also charted on the Billboard R&B and got to number 50 in the Pop chart. It was re-released in 1971 four years after the group broke up and reached number 4 in the UK charts. Which just goes to show that not all of the best soul tunes were the obscure ones that didn't chart.

The Elgins - Heaven Must Have Sent You
Posted by drew at 08:00

That record needs a clean

Cheers Dickie, unfortunately I am there on Thursday, supposed to be Wed/Thurs but I have Billy Bragg on Wednesday night.

I have found Mr H that if they play fine don't fuck about with old singles.