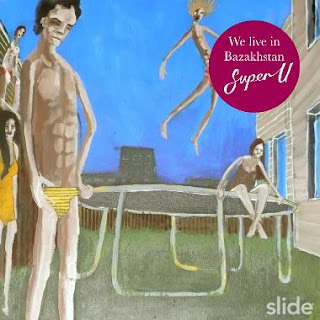 Some new music for you from a band who hail from Brighton,  Super U. They release their debut album, We Live In Bazakhstan on the 1st of December on Sack The Juggler records.

I don't really know how to describe their sound, there is a bit of everything in the mix, a bit of hip 60's, a lot of indie and quite a bit of folk. I've seen them being compared to Belle And Sebastian and a bit like Camera Obscura;  on a couple of tracks there is a nod in the general direction to B&S but they are not quite so fey and I just can't see the Camera Obscura comparison myself. I really like the album, there are a couple of melodies which I keep finding myself humming and the lyrics are witty, not sure about the flute though.

Email ThisBlogThis!Share to TwitterShare to FacebookShare to Pinterest
Labels: Super U