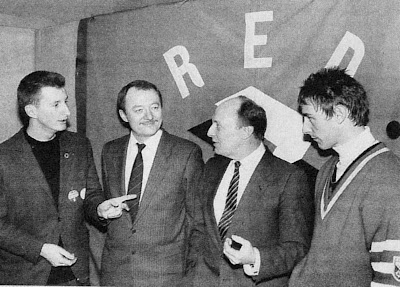 The mid to late 80's were a good time if you were an earnest young man with lofty ideals and a rudimentary knowledge of politics and class struggle. Not so good if you were a miner, shipyard employee, steel worker or any of the other "traditional industries" that were decimated during that decade.

By about 1983/84 I had become quite politicized after being introduced to Crass via my best mate's older brother's record collection (when he was out). I had avidly sought out music on Crass's label and bands with the same anarcho punk leanings, however there were a couple of problems for me in most of this otherwise worthy output. Most of the music was rudimentary at best with lyrics spat out at 100 miles an hour. Lyrics that made me think and question my own beliefs. But was it music? Possibly. Could you listen to it on a daily basis? No. Did I really believe that we could live in "anarchy, peace and freedom"? Not a chance in my neck of the woods, Strathclyde or any where else in the UK for that matter. For me there was a gap waiting to be filled. Yes I could listen to Dylan but it said nothing to me about Britain under Thatcher and although I loved all the political punk/new wave stuff such as TRB, SLF, The Angelic Upstarts etc, they belonged to the guys a few years older.

Then one Friday night I was sitting in the living room as usual watching the Tube and it happened, this guy with a big nose and a guitar was singing" just because your better than me doesn't mean I'm lazy, just because your going forwards doesn't mean I'm going backwards". I had found my protest singer, who was saying what I was thinking and with the bonus of being reasonably tuneful.

Through the 80's I got involved with a few political/protest movements, Red Wedge, although I was not yet age to vote, the Anti Apartheid movement, Amnesty International and CND. I remember this time as being thoroughly fucking grim but with a great soundtrack of protest songs by the likes of Bragg, the Beat, the Redskins, the Communards, Chumbawamba etc and up here Dick Gaughan.

The first track up is the track that first put me on to Billy Bragg, from the 6 track mini lp Life is A Riot with Spy vs Spy.

Billy Bragg - To Have And To Have Not

Secondly, a track from the first Chumbawamba lp "Pictures of Starving Children Sell Records". This was long before they signed to EMI, released Tub Thumping and were involved with the debacle at the Brits with John Prescott.

Lastly possibly my favourite of Bragg's own political tunes recorded live for KEXP.

Billy Bragg - Waiting For The Great Leap Forward.
Posted by drew at 00:17

I remember seeing Bill on that very Tube.

And I happen to have it on a VHS somewhere...

my soul was with you tho and I fell in love (the first time) along with Billy with "Milkman of Human Kindness" even as I marched and made picket signs and sewed patches on leather jackets and armbands and shouted in megaphones.

He asks me what the use is? I offer him embarassment and the usual excuses.