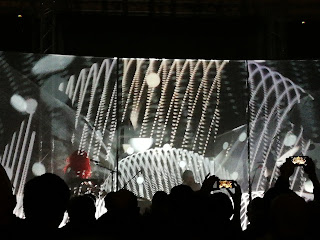 Like SA over at the Bagging Area, I also saw Moon Duo last week. Not in Manchester but at a new venue for me BAAD (Barras Art and Design) behind the famous Ballroom and across the road from ST Lukes. I had attended a couple of record fairs there but not a gig and it turned out to be a great we venue. I will not be giving you an in depth review of the night as I could not compete with Adam's excellent piece from last Wednesday, suffice to say it was fucking magic. Although I think it would have worked in a seated venue what with the lightshow and me getting on a bit but that's a personal preference and has hew haw to do with the performance.

High Over Blue was an unused track from the sessions for the Circles album which was released on a limited single sided 12" single for the Belgian label Sleeperhold Records and on a second disc on the Australian edition of Circles. It is for all intents and purposes a sprawling jam drenched in reverb, noodley guitar solos and undecipherable muffled vocals but we are not averse to long improvised jams hereabouts.

Not a bad way to spend twenty one and three quarter minutes on a Monday.

This'll do for me - splendid stuff. The older I get, the more I enjoy getting lost in lengthy cosmic wig-outs.

Lovely stuff. They were brilliant in Manchester, loved them.